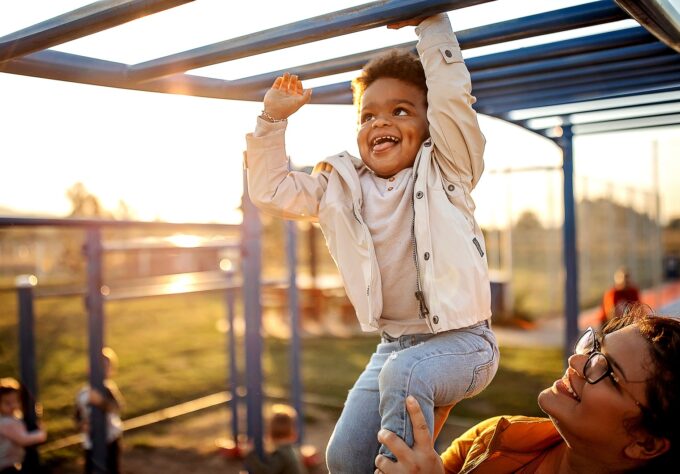 There is no doubt that the COVID-19 pandemic has brought about many changes and challenges. Adjusting to new routines and schedules can make it difficult to maintain healthy habits. Remote learning and working from home can impact structure around meals and other activities. While technology has made many things possible in this transition, it has led to increased screen time for many children and families. It’s time to think outside the box and find new and creative ways to unwind and spend time together at home. These strategies are great to keep in mind during colder months at home as well! Nutrition Nutrients such as vitamins, minerals, and protein help to boost your immune system and help your body fight against illness. Minimizing processed foods, high sugar, and fat can also help keep your immune system strong. Higher amounts of sugar and saturated fats (found in high-fat meats and dairy, […] 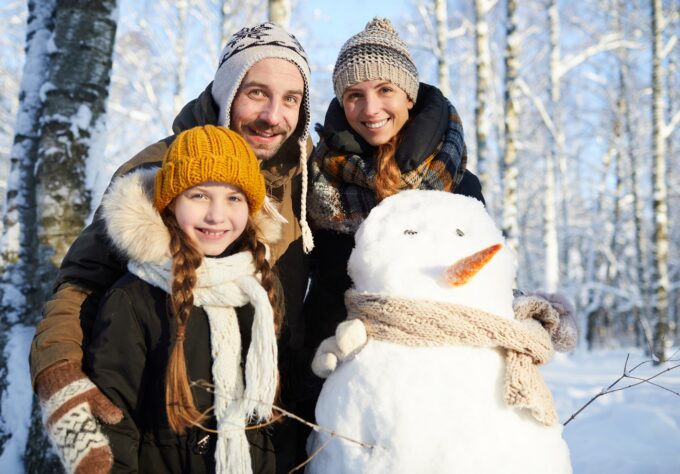 Kids tend to gain more weight during extended breaks from school, like over the summer. We’ve seen a similar trend when COVID-19 restrictions were in place. A recent report from the Centers for Disease Control and Prevention (CDC) showed kids gained weight more quickly during the early months of the pandemic as compared to the previous year. There are many reasons why, but it seems without the structure of school many kids eat more and move less. The COVID-19 pandemic really messed up our daily routines. School closures, remote work, and stay-at-home orders meant going to bed later, eating at different times, snacking more, being less active, and spending more time in front of screens. This fall, things started to get back to normal as children returned to school and other activities. But just as we have gotten back into our routines, here come the holidays. Holiday weight gain is […] 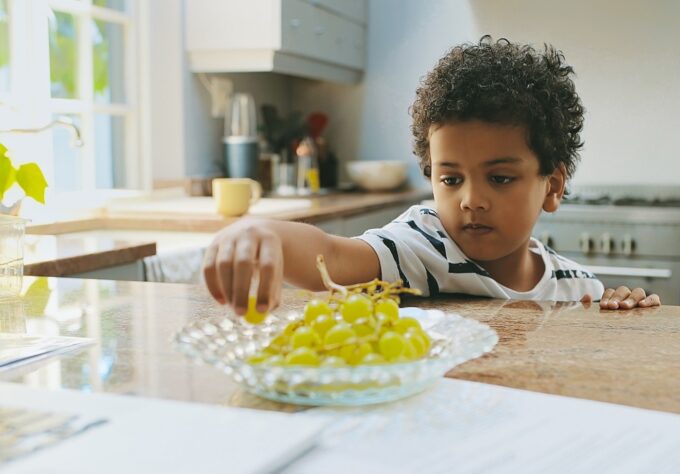 When selecting a snack, it is important to think about a few key factors including timing, hunger level, portion size and nutritional value. Timing As a rule of thumb, it is helpful not to go more than about 4 hours without eating, even if it is something small. Long periods of time without eating can increase hunger later in the day, making it challenging to practice portion control when you finally get a chance to eat. It is also very challenging to make healthy choices when you are feeling extremely hungry. Snacks help to bridge the gap between meals and can help lessen hunger to an appropriate level prior to the next meal. Be cautious of grazing! Grazing is a term used to describe constant snacking. It is important to allow time (approximately 2-4 hours) between meals and snacks to give the digestive system a break. Most children should aim […] 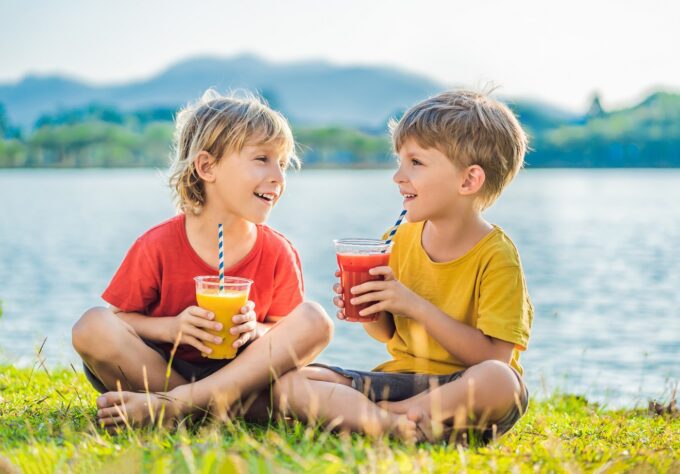 Smoothies can be an easy and fun way to incorporate various foods into your child’s diet. Understanding the potential benefits of smoothies, how to prepare them, and when and how to incorporate them can make an enjoyable and healthy option for the whole family!      Benefits of Smoothies There are several reasons you may choose to incorporate smoothies into their child’s daily or weekly routine. A few nutritional benefits to smoothies can include: Increased variety of fruits and vegetables: Sometimes children will accept a wider variety of fruits and vegetables in a blended form more than they will in the whole food form. It is still important to continue to expose your child to the whole food form on a consistent basis even if they are consuming the fruit/vegetable in the smoothie. Boost of vitamins, minerals, and antioxidants: Smoothies often combine several fruits and vegetables in one recipe giving a […] 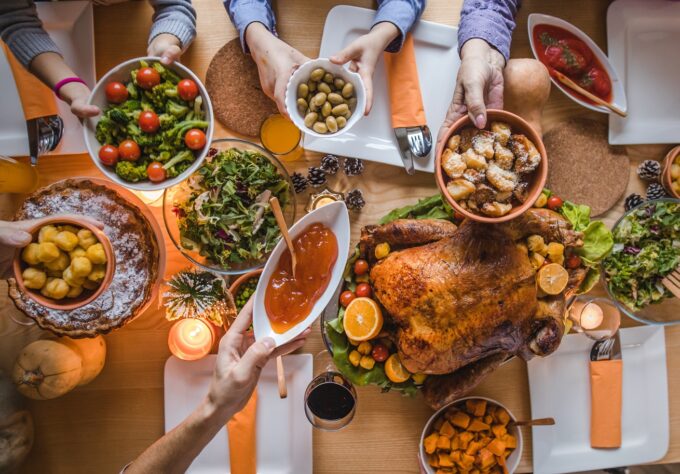 As the fall and winter seasons are upon us, so are the celebrations and comfort food that follows. How can we add to our favorite comfort foods for a fun and balanced holiday season? Check out these helpful tips on how to get the most out of your favorite dishes. Include proteins into your favorite dishes. Try adding a protein source like pulled chicken or ground turkey to macaroni and cheese for added satisfaction and strong muscles. In substitution of sour cream, try Greek yogurt for added protein and calcium. Hidden veggies can keep our favorite foods enjoyable AND provide the micronutrients our bodies need to be strong. Try these recipes for your next holiday meal: Mix pureed cauliflower into mashed potatoes for a light and creamy side dish. Add shredded zucchini to a meatloaf mixture for a moist, flavorful slice. Incorporate whole grains into your favorite treats. Here are […] 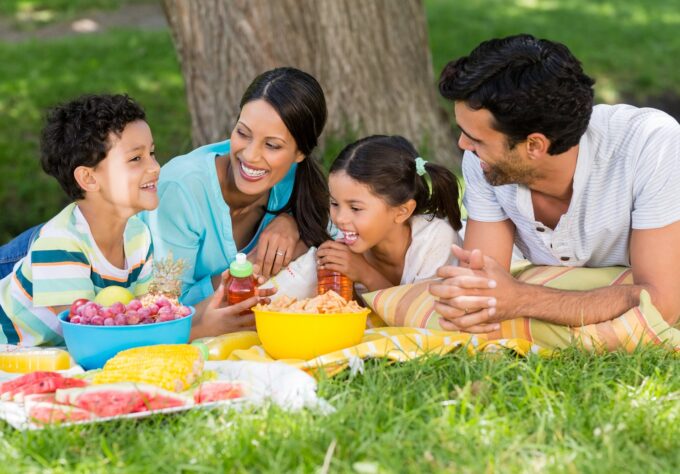 Summertime – sometimes synonymous with camp, vacations, sleeping in, relaxing outside in the sun, spending time with friends and family, and having a break from school. During these months, sticking to a meal schedule can be difficult when a child’s day-to-day schedule may be changing. It may be a challenge to keep kids on a schedule and ensure they are fueling their bodies for all the summer activities they are interested in. Here are some tips and tricks that will keep your summer meals on schedule! Plan Ahead Every week or every other week sit down with the members of your household and brainstorm some meals for the coming weeks. This will get kids involved in meal choices and encourage trying new foods. Plus, organizing ahead of time will take some of the stress away from the person responsible for planning, shopping, and preparing food. Meal planning options: Keep cut […] 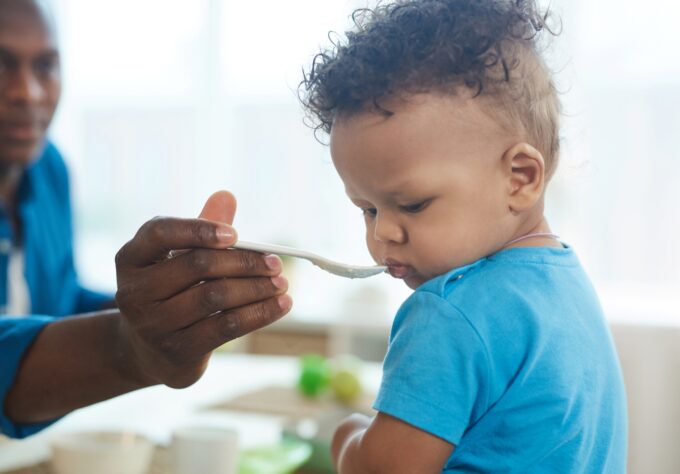 Who recalls the joy and excitement of their baby gobbling up all sorts of messy foods? One of my favorite photos of my son is him at 7 months old with a yogurt beard. As parents and caregivers we often work so diligently in those early introductions of solids — whether it’s spoon fed purees or baby led weaning. But something tends to shift in those toddler years. Our little ones have more awareness of hunger and satisfaction cues and their preferences for flavors emerge. We often see children start refusing those previously accepted foods and showing a liking for specific foods. It can be daunting not to comment on our child’s negative responses to food or trying to persuade them to “just take a bite.” Listed below are some tips to help you navigate these picky eating behaviors. Understand Hierarchy of Feeding Ellyn Satter, a dietitian who is recognized […] 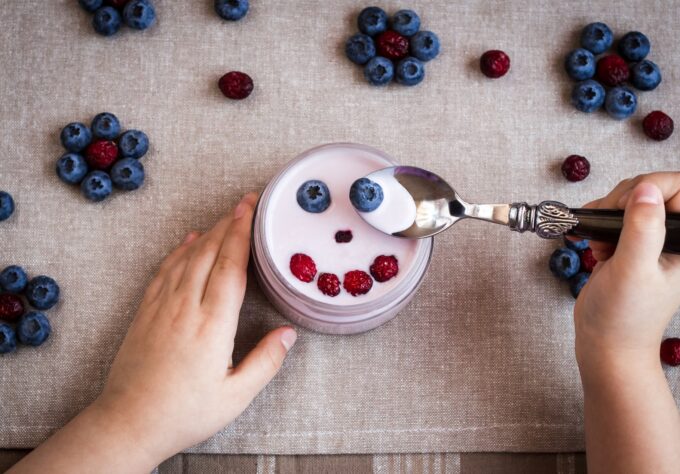 A walk down the yogurt aisle can be overwhelming to say the least.  There is Greek, French-style, Icelandic, drinkable, squeezable, organic, fruit on the bottom, whipped, non-GMO, and dairy free. Supermarkets may have up to 500 different varieties of yogurt on the shelves. So which is the best yogurt for kids?  What is yogurt? According to the FDA, yogurt is defined as a fermented dairy product.  It is derived from the fermentation of milk by two species of bacterial cultures, Streptococcus thermophilus and Lactobacillus bulgaricus.  Other cultures such as Lactococcus lactis, Lactobacillus casei, or different species of bifidobacteria may be added for taste, texture, or for their probiotic properties.  There is no FDA standard for plant-based yogurts, which may be fermented using S thermophilus and L bulgaricus.1  Live cultures are living organisms which change milk into yogurt during fermentation. Some yogurts are heat-treated after fermentation and most, if not all, of the […] 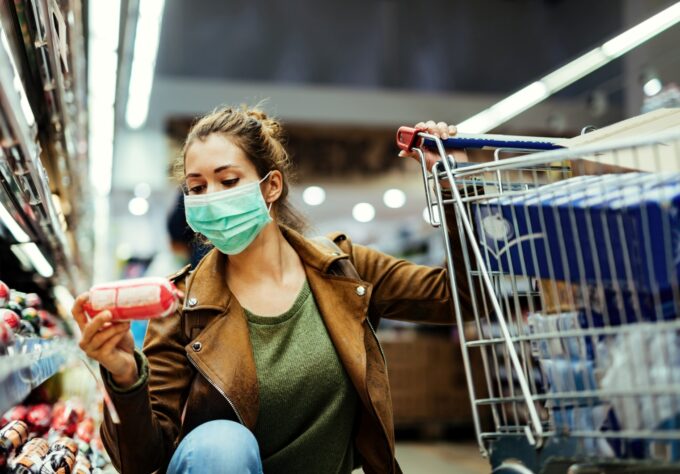 As the country tries to re-open amidst this global pandemic, the Center for Disease Control and Prevention (CDC) is still encouraging people to stay home to help minimize the spread of coronavirus (COVID-19). Are you struggling to keep your pantry and fridge stocked? It’s easy to make the most of your grocery store orders, whether shopping at the store or ordering online, it just takes a bit of planning and meal preparation in some form. This may mean simply stocking up on food essentials on taking the time to plan family meals. Stock Your Shelves, But Do Not Hoard No matter what works best for your family, what is important is that you do what you can to have about two weeks’ worth of food at home (per U.S. Department of Homeland Security recommendation). Below are some tips for food shopping during this unusual time. Check what you already have. […] 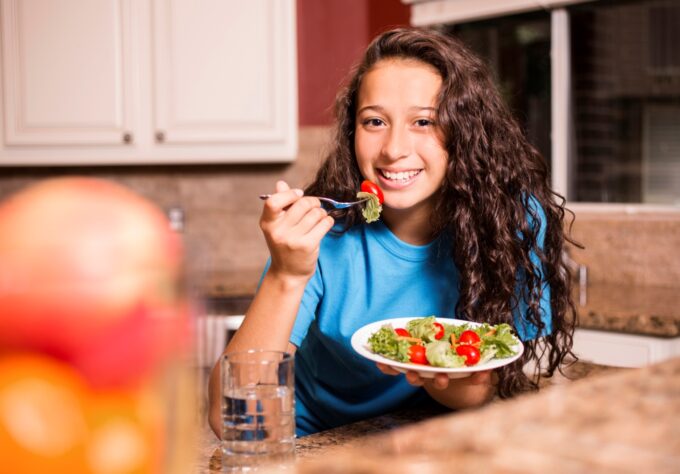 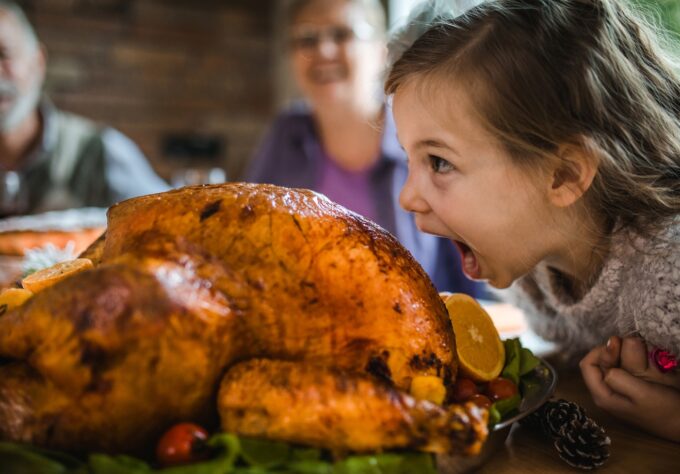 The holiday season is a wonderful time to celebrate traditions with family and friends. But it can also be a tricky time, when we veer off track from our health goals at various social events with all of the delicious food and beverages. Keeping Myplate in mind around the holidays is a helpful way to control portions while still enjoying your family traditions. MyPlate reminds us to make: half of the plate fruits and vegetables a quarter of the plate include protein and the other quarter to include grains or a starchy vegetable. How to Stay on Track During the Holidays Snacks: Consider having a healthy snack before you leave for that holiday gathering. Your snack should include a fiber and protein source so it is guaranteed to help you feel fuller, longer. This will also help with portion control and ensure you are still satisfying your holiday cravings and […] 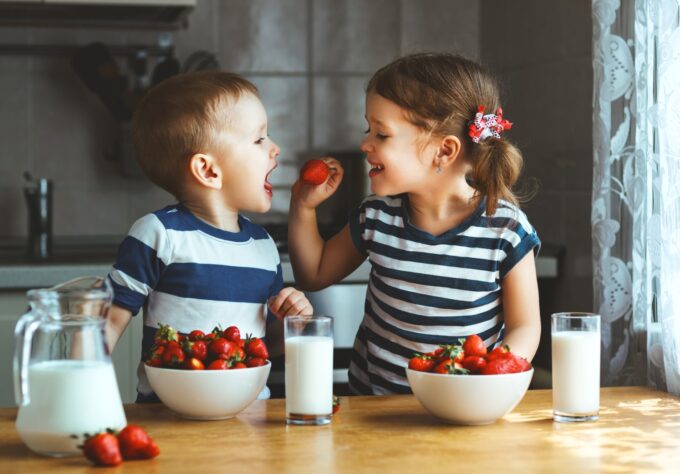 Snacks can be a part of a healthy diet. Think of snacks as a little bridge from meal to meal, especially if meals are consumed longer than four hours apart. Snacks may not always be necessary every day, or between every meal. Aim to limit no more than 2-3 snacks per day, and be sure that healthy snacking is only offered/consumed at appropriate times.  Pair Protein and Fiber Pairing protein and fiber-rich foods can help fill your child up. The term “satiated” is used to define the feeling of fullness or no longer feeling hungry. To improve satiety, be sure to offer one protein item or one fiber item. Or consider offering a combination of the two.  Protein sources include: dairy products such as milk, cheese and yogurt nuts and seeds beans eggs meat fish Fiber sources include: fruits vegetables whole grains such as whole grain crackers, granola or a […]